This suggestion is about adding lower tier rarity relic items back into the game. If you are a newer player, or simply forgot, back in season 1 of StickyMC there were relics of the Rusty, Common, Uncommon, Rare(?), and Majestic rarities. These relics would be worn on mobs and when you killed them they would drop, just as Mithrils do now, but they are much rarer so you may not have seen that for yourself. These relics were mostly useless on their own, with maybe 1 or 2 enchants on them and they wouldn't be guaranteed to be relevant (ever tried frost walker on a bow?). Most of the value of these relics came from salvaging, and if you don't know what that is I wouldn't be surprised, as nowadays there are few things to salvage. Salvaging is when you go up to a Holy Cauldron (located at spawn or you can make one yourself with a netherite block and a cauldron) and right click it with an undesirable relic, or nowadays a runestone works as well. In exchange for deleting the relic you offered, it would give you some experience bottles and rarely, depending on rarity of the relic, a Relic Fragment.

This is the main inspiration of this thread, the fact that Relic Fragments are obtained exclusively from voting or as a result from voting. This is not necessarily a problem, as it is still possible for any player to get Relic Fragments, especially if they are up to trading, but doing that is hard now as there appears to be a Relic Fragment shortage. Granted, this is based on my own observation mostly, so take this how you will, but I have seen many, many more people attempting to buy Relic Fragments than mithril cores in the chat, which would seem to suggest this. Especially when most of those requests for Relic Fragments seem to go unanswered (I can't see if people work out something in DMs). I think this is a little odd, considering that the Mithril Cores seem like they are supposed to be the rarer item to obtain, considering the recipe to make a Mithril Essence only costs one of them. These are still not necessarily problems, things can and have worked out this way, even if I personally think it is a little odd, but there are a couple other things to highlight that the removal of lower tier relics has affected.

For one, they gave a steady source of experience bottles, an item I feel was heavily underutilized in the vanilla Minecraft game which Sticky gave some life to. Not the coolest thing ever just a thing I think is pretty neat and somewhat useful.

Second, I'm sure most of you reading this have seen a new player in chat asking about some part of the relic system (Can we make a title that says /relics in big letters when someone mentions stuff like that?) and almost always the answer is /relics as it does a pretty good job at explaining everything; however, I have noticed that newer players are asking this question less than they have before (again, based on my own observations and not real data). You might think that this is a good thing, that newer players are finally using their own tools to figure out the relic system. I don't think this is the case. As far as I know, there has been nothing changed from late season 1 to season 2 about explanation of server mechanics to new players. Newer players were asking about relics more back then because they were discovering them. They would find a mob that had an unusual item and see it had a unique name and unique stuff on it. Then they would naturally ask a question about it (/RELICS). Nowadays they don't get that, their only experiences with relics are getting lucky with their first 5 votes with a legendary essence or seeing what all the cool stuff is people are /show-ing in chat. I think relics are one of the main draws to the server, they make this server truly unique. They are absolutely what attracted me to the server, as they are just cool. Of course I'm talking mostly about mithrils here but the other relics were a nice lead-up into that, even if they were pretty bad; however, you don't have to implement these relics back in the game the same way they were before.

Freshen up Those Relics

First, you could consolidate the lower tier relics all into one or two tiers to make the system less "bloated" if that is your concern. Then, you could make the relics always have relevant enchants but make those enchants have lower numbers or at least have a cap, so you could feasibly get a sharpness III iron sword near the beginning of your journey that would be helpful. Next, this goes sort of against the thread, but I want to lay it out anyways, you could get rid of the gear aspect entirely and just make mobs drop different (or one) rarities of "Relic Shards" (represented by an enchanted ghast tear) that you could salvage for similar rewards. 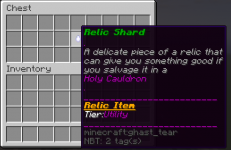 I also think that the relic system should work in such a way that all jobs benefit from it but that is for a separate thread (dunno if and/or when I would make that). You could also just implement it the way it was, and I think that would be fine, these are just some suggestions that would help remove the uselessness of the lower tier relics and maybe improve the server a bit as well.

A Case for Improvement

This is not a complaint thread, I don't want anyone to get the wrong idea, the system is fine how it is now, but I think it could be improved, that's what this thread is about. I briefly talked about it on the Discord and it was suggested I make a thread about it, and I did, to lay out my thoughts as well as I could (I think it's a little wordy and not very concise but I get the idea across). And those suggestions? I'm not saying those are the only ways you could go about implementing them back, or that you have to implement them separately or together. I'm sure there are other, better ways, but hopefully I at least provided some food for thought that can be used to make the server a better experience for all.

I want xp bottles
You must log in or register to reply here.