With villagers gone in Season 2, it leaves out some gameplay features. To name a few:

-Emeralds no longer have a use
-Mending is way harder to get
-Obtaining some 1.17 vegetation items isn't possible

I've seen alot of people frustrated over this, so I thought of a way to reimplement the idea of villagers, with added bonuses.

Essentially, the main idea is to have merchants that rotate weekly in spawn. Some will sell items corresponding to jobs, and others will sell special goodies. Players will pay for these items with emeralds, giving them a use on the server. Players will also have the chance to vote on a monthly lineup for which Merchants they would like to see arrive in spawn.

Part One: The Lineup 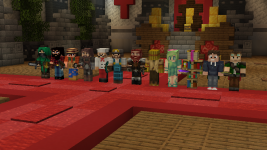 Each job category will have a corresponding Merchant. From left to right, we have:

For this example, we'll look at the Hunter Merchant. 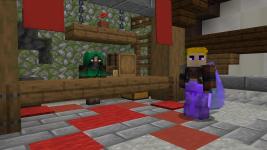 Each Merchant will arrive to the same location in spawn, with a customized version of their market stand. 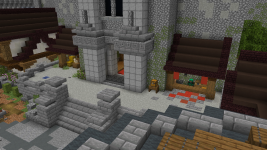 By right clicking on the Hunter Merchant, a menu will pop up. 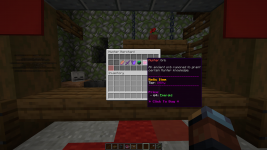 Players will be able to purchase these items in exchange for emeralds. In this picture, the player is about to purchase a Hunter Orb for 64 emeralds. (prices can change, I just picked 64 as an example)

- The Vegetation Merchant will sell big dripleafs, spore blossoms, and other currently unobtainable plants on the server.
- The Enchanted Villager will sell runestones and enchanted books (including mending)
- The Trophy Merchant will sell staff items, such as staff figurines and staff heads.
- The Mapart Merchant will sell custom maparts, which players can put in a collection.

(These are just 4 I thought of, if you have any other ideas for Special Merchants, feel free to add to my list )

Players will have the chance to vote for 1 of 4 lineups for the month on the StickyMC Discord server. A post like this will be put in #announcments: 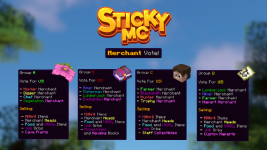 Players can then click on one of the react emojis below the image: A, B, C, or D.

Once the vote concludes, expect to see the winning Merchants arrive soon in spawn.

For example, if Group A won, the first week of the month would feature the Hunter Merchant, then the Digger Merchant, and so on.

A new vote will happen at the end of every month. If the Group you voted for doesn't win, don't worry! The Merchants will get cycled again for the next vote.

This suggestion solves the issue of players wanting the new 1.17 plants, having a use for emeralds, and obtaining mending books. Its a very substantial suggestion, but I think it would be nice to work towards. If you have any comments/suggestions of your own, feel free to add them in the comments below.

I do like the overall idea of this add it would add something dynamic every week! However, I do feel that using emeralds to pay for things favours Miners for than. However, I did see there is a point system in the jobs plug in. Perhaps use of that can be used for this, in terms of payment. The more you perform your job, you can obtain job points. I think this would be best if it was an overall point system rather than job-specific. But if you could use job points to purchase certain things from the merchants, it would encourage you to play more, grind your jobs more, with added benefit of these weekly merchants.
Also, I'm not sure about the purchase of mithril items, however, that is of course just my opinion!
big big hax ™
First to 64 Relic Crystals
Snow | Wyvern | Regent​

Great idea
You must log in or register to reply here.